Species: 50% Dire Wolf, 20% Hell Hound, 20% Wraith, 10% Mackenzie Valley Wolf
Height: 43in
Weight: 190ibs
Length: 6 ft, 9 in
Fur Texture: Curly
Fur Length: Medium-long
Eye Color: Soft amber and orange
Nose Color: Charcoal
Tongue Color: Pale red
Claw Color: Obsidian; rear right paw has two toes with white streaks on the claws.e
Base Color: Sooty black
Secondary Color: Chocolate
Third Color: Gray
Markings: Has chocolate and gray markings along his brow and sides, almost looks like shadows are reaching over his body
Scars: A series of jagged slash marks and vicious looking bites mar his forelegs and haunches. There's also a small scar on the left side of his muzzle, going from beneath his nostril all the way back to disappear into the fur of his cheek. Mostly covered by his thick feathers he also has multiple scars on his wings.
Accessories: N/A
Growths: A pair of muscular, black and brown wings are situated on his shoulder blades, they can be tucked in nice and tightly to remain out of the way. On his head he has a pair of black ridged horns growing from his skull, curling over toward the back of his skull much like a markhor's horns.
Reference: Ref by @IceQueen

Element /Magic:: Darkness/Shadows
1st Spell: [Level 1] Shade strike- tendrils of darkness seep out from his shadowed wings to make six arms lash out to do damage or ensnare a foe.
2nd Spell: [Level 2] Facade- using the power of darkness he engulfs his foe in shadows for a brief period, making them live out their worst nightmare in a daunting hallucination while he escapes unscathed.
3rd Spell: [Level 3] Summon- this can only be used once in a while and takes an immense toll on Silas. With his Dark bond he summons a shadow wolf from the dark realm of his element's power, it cannot be harmed by physical attacks and is relentless in its own towards the enemy.

Parents: Zevran♂ & Freja♀
Siblings: N/A
Relatives: N/A
History: Born the only pup to a warrior and a seeker, he found himself alone for much of his puphood or at least getting into trouble by playing pranks on the elders. His horns are inherited from his father while the wings are from his mother's genetics, both of which were powerful wolves although Freja was more streamlined for flight. She taught him everything she knew with her wings and the winds, her own element despite knowing what element was dwelling within her only son which was inherited from Zevran's blood. Due to having horns and wings he has quite the muscle definition built up around his shoulders, back and neck. His long legs aid him in swift take-offs for flight as well as coming down on top of his prey, or making a hasty getaway once the thief has been caught.

Three years ago his parents both fell ill as did the elders of his birth pack; the local waters were tainted with sickness. Having no medical experience he could do nothing but watch them all waste away and lose their minds as their bodies betrayed them, only bringing them some food or fresh water in a hollowed turtle shell which was vehemently turned away by each sick wolf. After burying the elders and his parents, Silas left his birth place to wander the lands and practice his thievery while vowing to keep moving forward no matter what. 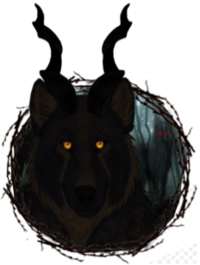