Brawn loved to fish, and he liked to swim. The Male was a skilled hunter, and with that, he would fish as well as chase the bison herd that grazed in their small herd through various parts of the territory. Hunting was no easy task in winter, though, and brawn needed to be smart.

The winter leaves the streams frozen and brawn needed to find a weak point in the ice if he were to fish. He paced the stream at a trot, looking for the entrance to his fishing ground, patient. Toward the middle of the stream, he noticed a crack there and seized this opportunity to inch to the edge of the bank and began stomping on the cracked ice like a fox pounced front paws first on their hidden prey in winter snow. Brawn liked at his lips with anticipation, but he knew the task would take a bit. Despite being in alliance with the Winter Guardian, that didn't mean he made it easy for his own people all the time....Actually fishing for fish was the hard part. 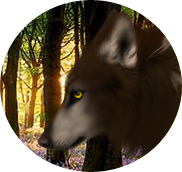 Her voice so chipper and light, one would think that nothing could ever bother Maell. They would think her daft and going along with everything in her easy-going way when, in reality, that was all false. She was deathly concerned about what would happen to them in Winter, what would happen to her and all her other friends. After all, this was more than just another trial to be solved in a fair fight.

This was leaning towards war. Even more so with the secret whispers of a growing rebellion. Maell wasn't sure how true these rumors were, but she hoped there were a substantial amount of Winter wolves who wanted things to go back the way they were. She wanted peace more than anything.

Needing a break from watching eyes and all the tension, she slipped out of the main den to walk along the river. Now that winter was in full force, she assumed the river would be fully frozen which meant she could do one thing... go skating! A little bit of fun always took her mind off the doom and gloom, though she never showed it bothered her anyway. But all of that slipped through her mind as she saw a form by the river, seemingly lost in their own world. She recognized the pelt enough to know it was a packmate of hers and one that she knew quite well. "Brawn! Hey, Brawn! Whatcha' up to?" She yelled out as she trotted up happily. Her paws slipped a bit on the ice causing her to slide and lightly bump into the male, but she just giggled and smiled up at him in response. If he wanted to get any fishing done, she may not have been the best partner. 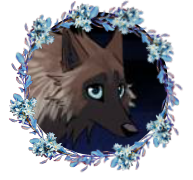 Brawn worked at the ice, patience unraveled, watching the ice break little by little. The brown Male hard up until he heard a voice which resulted in the males ears shifting to the voice he knew belonged to herbalist, Maell. Brawn paused in his work just before the young female bumped him. Brawn grunted as he shoved Maell gently away from him smiling at her. She had spirit and Brawn didn't want to snap at her. Her skill didn't belong to the hunt, he knew that. They were a year apart, what could he do? "Nice to see you, Maell." He replied as he sat down next to the cracked ice he had been working on. "What brings you out here?" She was a good soul. A soul trapped in war. Maell had good intentions, so it worried the strong hunter when she traveled alone.

With a soft nudge, the herbalist felt her form being pushed away from the male, but she didn't care. A big smiled remained on her face as Brawn spoke and then eventually sat down. "I was gonna go skating!" She beamed brightly, her tail wagging behind her in joy. Carefully, the female stepped away from where the male sat and pushed herself across the ice slowly, allowing her paws to slip and slide. A couple of giggles escaped as the female enjoyed her little game before she noticed the cracks in the ice. "Oh? Were you fishing? Any luck?" Maell trotted back over to the spot Brawn had been working at and placed her nose right against the ice as if she was trying to see between the cracks.

Brawn watched in amusement as Maell explained she wanted to ski and gave the Male a little demonstration before returning to him. The Scout chuckled at his friend knowing that she was, in his mind, still a pup. He raised a brow as she shoved her nose down to the ice as though to peer into it. "No," he said with a chuckle. "I still need to break the ice to catch anything. If I'm lucky, there may be some fish alive that can withstand the cold." He didn't want to hunt a mammal, he couldn't stand the rituals to a degree, despite his respect to Freki and Geri.

As the Scout explained his hopes for a successful fish, Maell couldn't help but frown a little. She knew her believes in no harm even for hunting of any kind was very odd, but she couldn't help hiding it. Still, it was the circle of life and the herbalist had to remind herself that. "Oh, okay! Do you mind if I sit and watch?" She asked softly. Even though she didn't want to help, the young girl didn't want to be alone, especially in times like these.

After a few moments, and many thoughts driving through her mind, she couldn't help but speak up again. "So what do you think Morgrim has for Winter? Rumor has it it's something special..." Maell asked surprisingly calmly. She knew the change of power was nearing rather quickly, and with Spring getting antsy, it was a mystery as to what could be such good news.

Brawn nodded in response to the young Heir before returning to a stalking position, eyes focusing on the makeshift hole the now stood between him and food. It didn't take long before his concentration was broken again. Brawn sat back on his haunches with a sigh. He smiled softly, wanting to hold his patience with one who was so interested in the pack politics. "Who can say what Morgrim has planned. Like always, he may summon the pack to the council halls." He gave Maell an expectant look. "Which you are to attend if he does call for us." Brawn knew of Maell to be....jumpy, but he also knew she was strong. He continued after a moment. "Meanwhile, I've heard patrols are heavy and everyone is to be on their guard if they travel near the borders." Brawn honestly didn't know what Morgrim may have in store for the pack he only knew that he was hungry.

Similar topics
» Les Miserables is now freeware (and A Tale of Two Cities is now released)
» Rosemary, A Pirate's Tale Roleplay
» The Tale
» A long and frightening tale of horror and degradation!!