Species: 80% dire wolf, 20% Mackenzie Valley wolf
Height: 34 inches at the shoulder
Weight: 146 lbs
Length: From nose to the tip of the tail, Talena is roughly 5 feet long.
Build: Talena is what you would call a lissome female. She is slender, tall and elegant. Although she gives off a feminine appearance, she has strong built legs, worthy of a hunter or powerful runner. She also possesses large rounded ears, usually always pointed forwards in a dominant manner.
Fur Texture: She possesses a relatively smooth coat except on the area around her neck, where a thick curly mane-like fur grows.
Fur Length: All of the fur on Talena is relatively long, but the fur along her mane is especially long and full.
Eye Color: Light lavender, will glow when powers are being used.
Nose Color: Dark grey bordering on black.
Tongue Color: Deep pink.
Claw Color: Black normally, but will glow the same lavender color of eyes when powers are being used.
Base Color: Most of her body carries varied hues of brown, mainly along her back, tail, and ears.
Secondary Color: Her “mane” is cream-colored.
Markings: In terms of markings, Talena is rather plain-looking. The most notable feature of her is her eyes, not her markings.
Scars: None currently.
Accessories: None currently.
Growths: When using her powers, small curved horns will appear between her ears and will glow lavender along with her eyes and nails.
Reference: 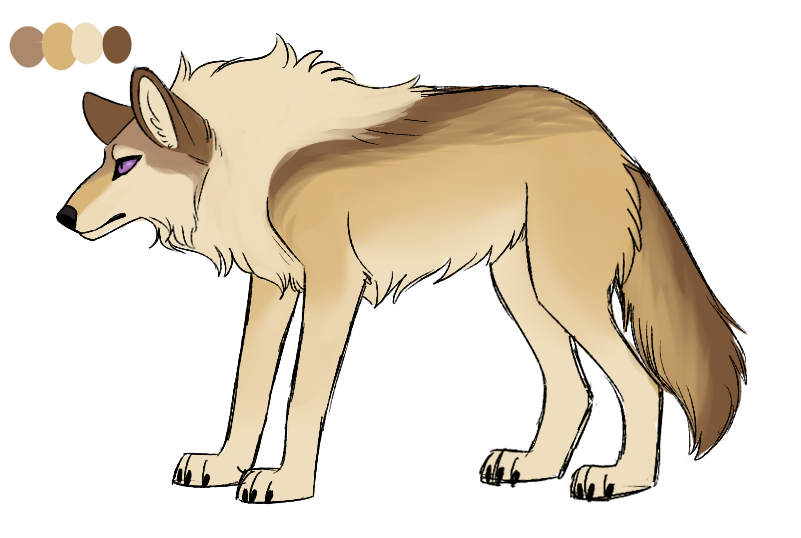 Element /Magic:: Siren's Voice
1st Spell: Siren Song [Level 1] - Capable of emitting astonishingly beautiful and enchanting singing voice that is capable of summoning/luring anyone who hears it come towards the singer, the user is great at getting what they want by putting their victim in a light daze. If the victims were placed into a semi-conscious state, they may not have any recollection of the previous actions that they performed while under its effect. Talena can take over the minds of her victims, even to the point of shutting them down. The victims are conscious of this interaction as it creates a psychic rapport between her and servant. This allows them to maintain a constant presence from within such that servants straying too far from Talena will be struck with psychic pain and suffer hemorrhages until they return to her. If the connection is strong enough, they may even be able to use this ability by mental call alone.
2nd Spell: Memory Manipulation [Level 2] - The user possess the ability to manipulate and change the memories of the victims under their control. They can erase memories all together or alter "key" aspects of them in order to change their victims' personality/get what they want.
3rd Spell: Sonic Scream [Level 3] - The user is capable of emitting an extremely powerful scream of high amplitude for the purpose of immobilizing a target(s) completely or partially, causing them to be left without movement and sensation. This is extremely exhausting for the user, however, and is used very rarely.


Connection Level One: The lowest of connections, usually resulting in nothing more than simple suggestions and small memory collections. This is the most common type of connection used, as it is the easiest to do quickly and is used more for fun than anything.


Connection Level Two: A modern strength of the connection. Multiple interactions between servant and Talena are needed, which would include the beginnings of memories to be altered in order to place Talena as a key person in the servant's life. Total devotion is being trained at this point as Talena has claimed an individual as their own.


Connection Level Three: The highest, and most dangerous, of connections. By this point, the servant is totally devoted to Talena and will do every command without a second thought. Very little influence is needed and the servant is able to travel long distances without the connection being weakened or broken.

Personality Traits:
POSITIVE TRAITS
Intelligent | Clever | Independent
■ From a young age, Talena has always been a knowledgeable and clever wolf. For all she can be ignorant from time to time, the she-wolf has always kept a proud, elegant and sophisticated essence about her. To her, how you present yourself, stands for a lot. She has no issue with being self-reliant and independent, she simply just chooses to take advantage of others or opportunities for her personal own gain, if given the chance. To put it simply, Talena is not stupid and she is certainly not someone easy or someone who you should try and deceive.


Ambitious | Valiant | Bold
■ When it comes to taking risks and chasing after opportunities, this she-wolf has never been one to stray nor be frightened from a challenge - if anything - she craves for it. Determined and courageous, Talena is not one to be so easily intimidated and is difficult to discourage or waver; resolute. While she may deceive others to get what she desires and help her achieve her goal, she is certainly not one to back down from a challenge… or well- many things. It will take a lot however for someone or something to deter her.


Charismatic | Confident | Assertive
■ A lover of the gossip, this young wolf is renowned to be one of the most sociable. A social butterfly among the many, it does not take much for her to introduce herself or make herself apparent, being a lover of attention too. Talena is not fearful nor nervous to start up a conversation - if she is even slightly interested in the individual - and will see what comes of it. Openly confident, she is overall an exhibitionist and will effortlessly and gracefully float about for mindless attention. It is easy to say that some may dislike her, some may actually like her, that is all up to personal interpretation.

Cautious | Cynical | Vigilant
■ In the eyes and mind of Talena, no one is ever truly looking out for anyone, but themselves. And she will admit that she is one of those individuals. She prefers to keep the number of relationships to a minimum, being that so she does not have to get emotionally invested or have someone to rely on her; even she believes that is bad as it is. With many of the times being disappointed and fooled in the past, Talena has learned to keep her emotions hidden and controlled and her mind focused and productive, which is why she pushes herself towards achieving personal goals and strengthening her status and reputation. Extremely attentive, she does not let her guard down and is constantly and quietly suspicious of everyone around her… believing that you can’t solely trust anyone… tough love is what she strongly believes in.

Superficial | Selfish | Ignorant
■ For all she is rather intelligent and bright, Talena is still somewhat of a crafty-tongued ‘brat’. She despises when she is told or proven wrong and often she expects to be given what she desires and will stop at nothing to see that she gets it; whether it be through herself or with the assistance of others. Status and reputation have also always been something she has basked in, believing that how you present yourself is very important. This being said, Talena is a difficult wolf to impress let alone satisfy, constantly searching for more that she feels will ‘better herself’, when in fact, it may be doing the polar opposite. She has no limitations at putting herself - and possibly her closest loved ones - priority and seeing fit that her life betters than anyone else’s. In the end, she believes that although she is highly capable of earning what she wishes through her own skill and ambition, that sometimes it is better who you know rather than what you know.


Vain | Egotistical | Conceited
■ Much like many of the views, she stands for when it comes to status and reputation, in regards to ‘presenting yourself’, Talena has also always had a strong belief about keeping up your appearance. She almost consistently keeping on top of how she appears. She is certainly a wolf who thinks she betters than others and is very egotistical with her abilities and strengths, bigging herself up to be more than she actually is. Nonetheless, alongside herself, Talena makes sure that those that surround her better her lifestyle whether it be by their physical appearance to their rank along with - of course - simply enjoying their company. She always tries to search for more, when really, she is searching for what she wants rather than what she truly believes she needs.


Guarded | Reserved | Secretive
■ Like many things, Talena is a faithful she-wolf and has many strong beliefs. In addition to this, she has believed that emotion is a weakness, which is why she constantly and stubbornly hides her true thoughts and feelings and masks herself with this facade to simply protect herself. Not many know what is going on in that pretty little head of hers.


Likes: Socializing, challenges, sparring, and exploring/hunting
Dislikes: Not getting her way, being corrected/wrong, being bossed around, youth (specifically pups), and mating season


Parents: Idra and Menhit
Siblings: Many were birthed from the same parents as Talena, though she’s lost track of all of them.
Relatives: N/A.
History: Born as a heir to Fenrirs' War of Fall, Talena grew up a rather rich and spoiled life. She was babied all of the time and very rarely didn't get her way. As she grew and learned about her pack's history, she began to become embarrassed about her family's origins. Warg was the God of serving others, and frankly, Talena wanted to be served not do the serving. As a Heir, she felt like she had the power to speak her mind and urge her pack to become more assertive, like the God's Sköll and Hati had done with theirs, though she quickly found herself becoming a loner at age three after having her ideas turned down. If they refused to make the change to no longer be stepped all over, she wanted no part of them. She's spent the last year since then traveling across the land, trying to learn about the other packs and how they operate, hoping to one day return to her family and lead them to victory.


Miscellaneous: - When meeting Talena, she will never expose her true ranking and place of origin. She's on a mission to make herself seem as ordinary as possible so that when she returns to take her rightful place as heir, she has the best chance at winning the war.